So to get ready for Thanksgiving next week, I wanted to make cute turkey cupcakes. Turkey-looking, not turkey-tasting. Ew.

So Martha has a cute recipe in her book, I went out and bought all the ingredients, and got started.

These were the hardest cupcakes I've made in a long time. The first batch of chocolate cupcakes exploded in the oven. They all overflowed and merged into one big cake mess. Threw it out. 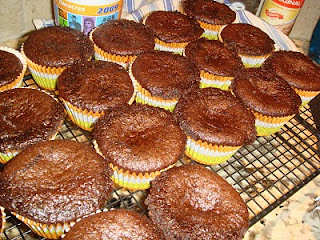 Second batch, I didn't fill the cups as much, but there was still some overflow, not nearly as much as before. I think it's because I used cake flour instead of regular flour. Weird!

So now I had chocolate cupcakes, and some leftover vanilla frosting from the vanilla taste test. I followed the instructions exactly, seen here. They look so cute, I couldn't wait to start decorating!
I couldn't find coconut marshmallows, so I used regular white marshmallows. I poked holes and inserted chocolate sprinkles for the eyes, came out perfect. Then I cut up the swedish fish and tried to attach the beaks. Didn't work. They didn't stick to the marshmallows. I tried wetting the cut end of the fish, tried attaching it with frosting, nothing worked. After seeing 21 droopy beaks, I gave up. Ate the marshmallows instead :) 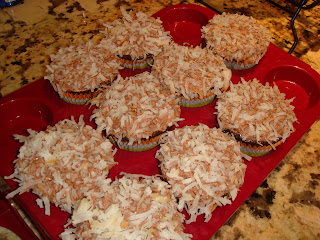 I was tired and frustrated at that point, so I just made the vanilla frosting chocolate, spread it on top of the cupcakes, and rolled them in toasted coconut. So, turkey cupcakes became chocolate coconut cupcakes. Still yummy, less cute. OH well!
Posted by Tania at 11:58 AM 1 comment:

Yesterday was National Vanilla Cupcake Day. I have been wanting to try out a few different frostings lately, so this was the perfect opportunity. 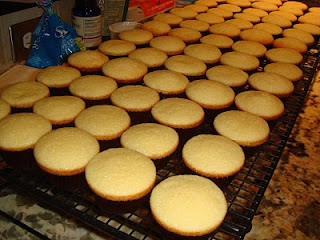 I made 68 mini vanilla cupcakes and 3 different kinds of vanilla frosting.

First up was 7 minute frosting. I halved the recipe so I wouldn't end up with tons leftover. This frosting is made of egg whites and a cooked sugar syrup. It wasn't too hard, it just took a while to get the sugar syrup up to the right temperature. 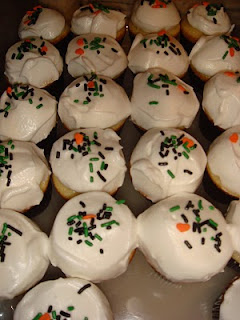 The frosting is super fluffy and white, almost like marshmallow. I mounded it on top of the cupcakes and used some festive fall sprinkles.


Second was traditional American buttercream. This is the easiest to make, with only butter, powdered sugar, and vanilla. 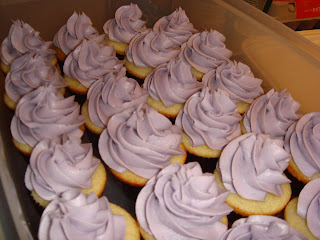 I tinted it purple to distinguish from the other frostings. This is the frosting I use most often, as it is easy to make and use. It can be too sweet for some, since there's usually 4-5 cups of powdered sugar in it. I also added a tiny squeeze of lemon juice.


Last was swiss merengue buttercream. This is the trickiest to make, although it was a lot easier than in the past. This is made with a warmed egg white and sugar mix, which is beaten to stiff peaks, and then butter (4 sticks!) is added in gradually. I usually have trouble with this frosting, but it was perfect this time. After adding the butter, it looks all goopy and wrong, but you just beat it like crazy for a few minutes and it's perfectly fluffy and smooth. 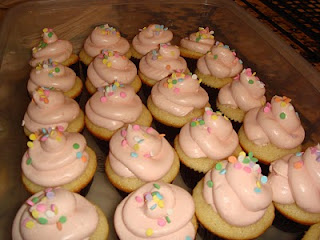 I tinted this pink. It's much less sweet, but richer than other frosting. When Jason tasted it, he said it tasted fattier, and that's due to the pound of butter. This is also a recipe that I can easily adapt to be sugar-free.

Anyhoo, took these to be tasted this morning. The 7 minute frosting had flopped overnight, so I knew that wasn't going to get good reviews. I think most people like the american buttercream, which is good, since it's easier and cheaper to make than the swiss merengue buttercream. I'm glad to know that I can produce any of these frostings rather easily.
Posted by Tania at 3:25 PM 3 comments:

Last nite I went to a lecture at the Denver Art Museum held by Johnny Cupcakes, the T-shirt entrepreneur. It was very informative and really pumped me up to listen to him talk about how he started his business with no start up loans or investors. I left all fired up and jazzed to get started developing my own business.

Before the lecture, 6 local cupcake shops had samples for everyone and there was a contest to vote who was the best. The bakeries were:
Mermaids Bakery, Lovely Confections, Living the Sweet Life, The Shoppe, Cake Crumbs/the Denver Cupcake Truck, and Happy Cakes. I've tried a few before, so I was interested to see how the rest were. Everyone chose 1 mini cupcake from each place, and then we all voted. 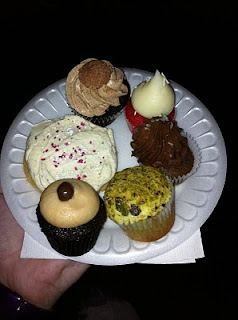 From Mermaids Bakery, I chose the mexican chocolate cupcake. They also offered a vanilla-strawberry cupcake. 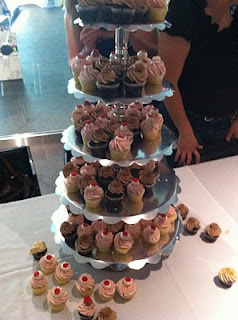 The chocolate cupcake was great, but the frosting was best- chocolate cinnamon! It was a light chocolate, and was super fluffy and airy, but still with a lot of flavor. I could have eaten just the frosting!

From Lovely Confections, they only had sugar cookies with frosting. It was ok, nothing special. Kind of disappointed they didn't have cupcakes! 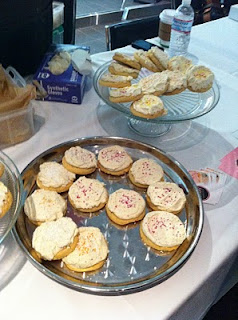 From Living the Sweet Life, they offered red velvet, chocolate, and carrot cake. I chose the red velvet. It was very red, the cake wasn't flavorful, and the cream cheese frosting was super tangy. 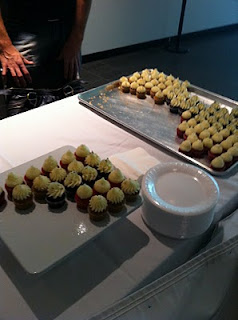 From The Shoppe, which I've tasted before, they had the biggest selection. Cookies n cream, banana caramel, pumpkin spice, strawberry, and chocolate salted caramel, which I chose. 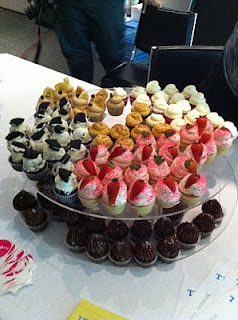 Presentation was great. The chocolate cake was not flavorful and a little dry, plus there wasn't enough of it. I know these are minis, but there was 3 times the amount of frosting as there was cake. Speaking of the frosting, it was amazing! Super rich dark chocolate sprinkled with fleur de sel, piped over a caramel. Yum!

Cake Crumbs is the retail storefront of the Denver Cupcake Truck. They only offered one flavor, pistachio. 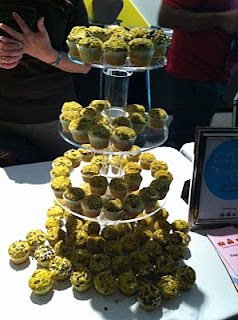 I almost passed it up, but decided to try it to be fair. The cake was good, I liked the pistachio flavor, and there were bits of nut chopped up inside. The frosting was too sweet, I could barely tolerate one tiny bite.

Happy Cakes also had a good selection. They had a sweet potato cupcake topped with a mini marshmallow, a pumpkin one I think, and a chocolate peanut butter, which I chose. 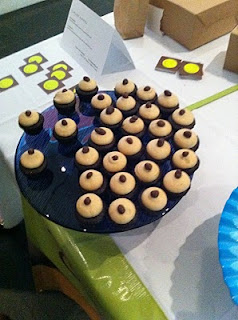 The cake was great, the peanut butter frosting was crazy rich, super thick. I like that it was topped with a chocolate covered peanut.

After much deliberation, I chose Mermaids Bakery as my favorite, although Happy Cakes came in a close second. Unfortunately, not everyone else agreed with me. The people's choice was The Shoppe. I'm just not impressed with their cake, although the frosting is very good.

After the cupcakes and the lecture, there was an after party outside where people could meet Johnny and ask questions. Before he came out, there were a few food trucks parked outside. One was a pizza truck (sorry I didn't get the name), and one was the The Biscuit Bus, operated by the Denver Biscuit Company. 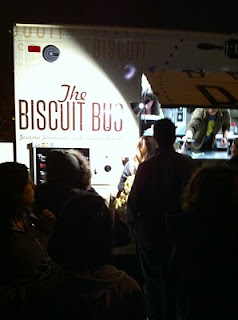 They served sandwiches on buttermilk biscuits. Yum! I had a fried chicken biscuit with a side of sweet potato fries. It was super yummy, although the chicken wasn't very flavorful, needs more seasoning. 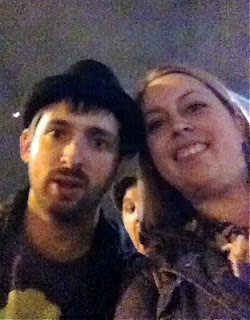 All in all, it was a great night, learned a lot, stuffed my face, and now I'm ready to get going!
Posted by Tania at 10:06 AM No comments: 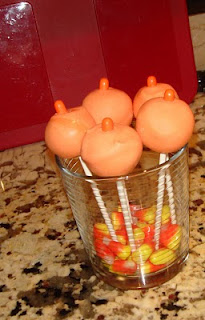 The last of my Halloween treats were pumpkin cake pops. They look and taste like pumpkin. I made these Saturday while watching Back to the Future :)

I followed directions from the Cake Pops book by Bakerella. She uses green tic tacs for the stems, but I couldn't find green, so I used orange. Every time I make cake pops they turn out better than the last time, so that's encouraging. 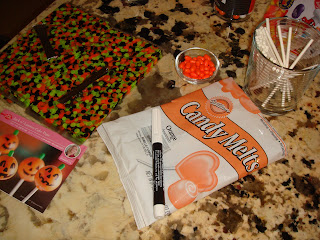 I made the balls with pumpkin cake and cream cheese frosting. Before I started I made sure that the baking sheet I had fit into the freezer and fridge, a mistake I've made before. 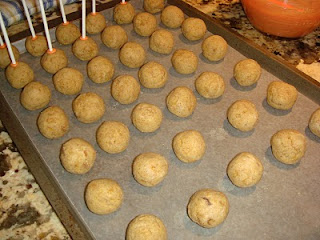 I melted the orange candy gradually according to the directions, and it was quite smooth, not like the chocolate I've used in the past. I'm still not satisfied with the bowls I have for dipping, maybe I need to search more for the perfect one. The pop has to be dipped in and out straight up and down, and that's my biggest challenge.

Anyways, dipped the pops, added the tic tacs for stems, and let them dry. They were already super cute! 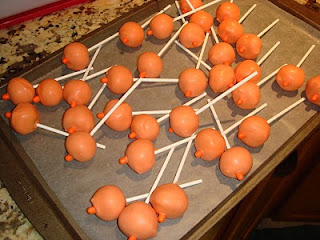 Then, I used a food color marker to draw on faces for the jack o lanterns. Or at least, I tried to. I don't know what it was, but the marker wasn't working properly. I could get maybe one or two lines out of it before it died. I tried cleaning it on a paper towel, as suggested, but that didn't really help. I gave up after 4 or 5 pops, it was too time consuming and frustrating. Maybe the pops were too cold, but I left them at room temp for a while to see if it made any difference, and none at all. Oh well! 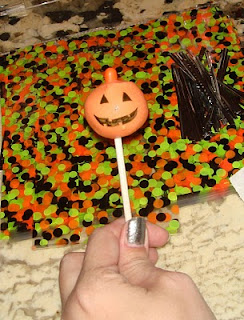 I still wrapped up the plain pumpkin pops in fun Halloween treat bags. Gotta love the dollar section at Target! :) 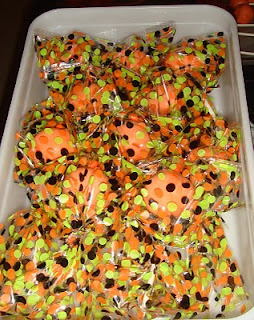 According to my taste tester, these were "mmmmmmm". I love how it looks with a bite missing. Yum! 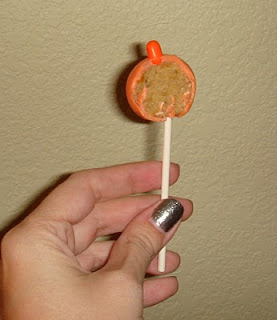 This project was certainly more successful than the last, and hopefully the next one will be even better!
Posted by Tania at 9:45 AM 3 comments: