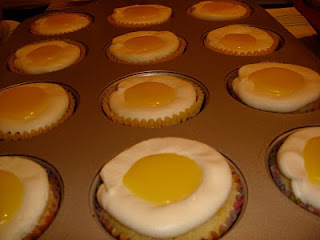 For the next Martha challenge, I decided to try her Meyer Lemon cupcakes, in honor of Easter/Spring. You see, in her book, the lemon curd sits on top of the cupcakes, which makes it look like an egg yolk. Since Springtime is all about re-birth, eggs are a perfect symbol.

First step, make meyer lemon curd. I love lemon curd, but have never made it. It's like a custard, lots of egg yolks, sugar, and lemon juice. I was pleased to find Meyer Lemons at Whole Foods, which are a cross between an orange and a lemon, so they're not as tart as regular lemons. I followed the directions for the curd, but I don't think I let it cook long enough. It was thinner than I expected, and I figured it would firm up in the fridge, but it didn't get thick enough. The direction don't say how long to cook it for, just "until thick". That's kinda vague.

Anyhoo, the cupcakes turned out great, altho it's a big recipe. I got 36, but Martha says it makes 42. They were so buttery and lemony and rather dense. It's almost like a pound cake. Smells so good! 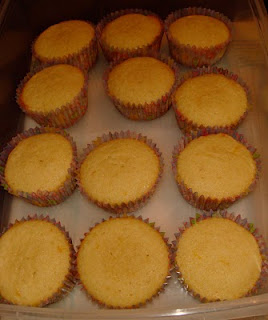 Now, for the final steps. The recipe says to sprinkle with powdered sugar and then fill the cupcakes with curd, letting it seep out the top to form a pool. I did this a bit different. Since I'd be serving them the next day, I made a traditional vanilla buttercream, and piped it in a circle around the edge of the cupcake. And since my curd was too thin, I couldn't pipe it at all, so I just dolloped about a tablespoon on top, inside the frosting. The white and yellow really made it look like a fried egg. 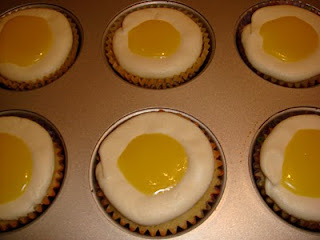 So, my husband was supposed to take these to work today, but he was sick, so now I have 36 cupcakes that I don't know what to do with. Anyone want some? Come and get them!
Posted by Tania at 5:17 PM No comments: 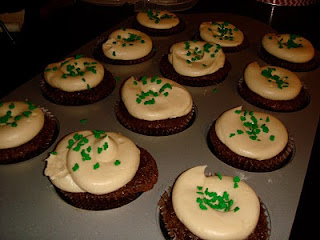 Happy St Paddy's Day! As usual, I made my world famous chocolate Guinness and Baileys cupcakes. However, I also make them into cupcake pops! It was very time consuming, and I messed up a few things, but they turned out great, and delicious too!

For anyone who doesn't know what a cake pop is, it's crumbled up cake mixed with frosting, then dipped in chocolate and decorated. On a pop! I think this is a great use for leftover cake or cupcakes, since the frosting moistens them up again. The possibilities are endless for decorating, but this time I just kept it simple. 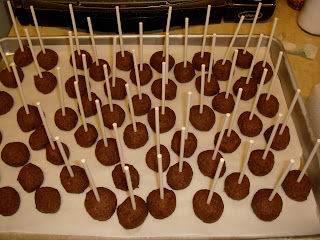 So, the challenges I had: I first bought green candy melts, melted them, all was good, but then I tried to be creative and add Jameson whiskey to them to add flavor. The entire mixture seized up, and no mount of re-melting would get it back to liquid state. So I had to go out to the store to get chocolate bark, except they didn't have any! Apparently, it's a seasonal item. So I tried a few different chocolate products, and they ended up working ok. So half the pops were white chocolate and half were milk chocolate. 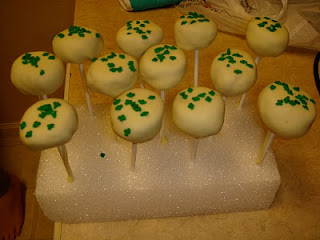 I also need to improve my rolling technique. Most of the pops weren't perfect circles, but kind of lopsided ovals. I will definitely try these again.
Oh, and the cupcakes turned out great too :)
Posted by Tania at 10:43 AM 1 comment: 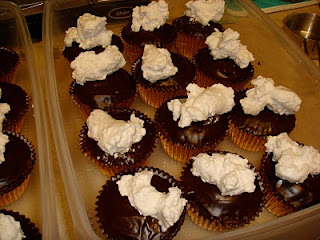 So, I've been dying to make S'mores cupcakes, and I finally got it together to make them. These were a multi-step cupcake. Since they're topped with marshmallow frosting, they must be served immediately after they're made. So I made the cupcakes the day before, and did the frosting in the morning. 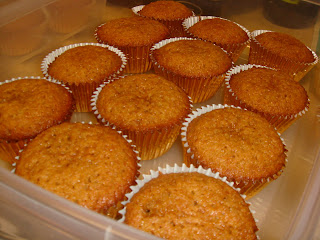 The cake part turned out well. The recipe called for graham flour, which Whole Foods didn't have. So instead I bought organic honey graham crackers, and ground them up in my food processor. It gave a really nice graham-y flavor to the cupcakes.
Then I made the ganache, a chocolate glaze on top. The ganache recipe in the book always makes way more than I need, so I'll have to figure out something else to do with the rest. I dipped the tops in the ganache, which also seals in the moisture. All this I did in one day. 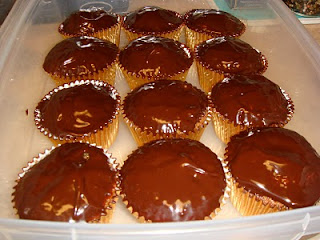 The next day I made the frosting. This did not work at all. It's a marshmallow frosting, made with gelatin and a sugar syrup. I guess I did it wrong, cuz there was a big goop of gelatin in the mixing bowl that never got mixed in properly. And, the pictures showed a huge dome of piped marshmallow on top of the cupcakes, but I didn't have nearly enough. I could barely manage a tiny dollop on each one. And it was not pipe-able at all. Not good.

Also, my kitchen torch didn't work! You're supposed to brulee the marshmallow, but I couldn't figure out how to work the torch, and I lost the box with the instructions. sad :(
So I delivered the cupcakes, and when I took the lids off the containers, all the marshmallow came off, because it was attached to the lid! But this was a good learning experience. Next time, I will put mini marshmallows on top of the ganache while it's still wet, so they stick. Then I will torch them, to get them all nice and brown on top. (ps- I love the way Craig Ferguson says "marshmallow". Check it out)
Next week, a foolproof recipe... Irish Car Bomb!
Posted by Tania at 2:48 PM 1 comment: 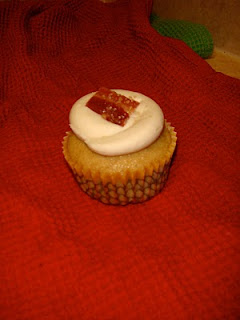 So, due to requests from Jason's coworkers, I decided the next challenge would be Maple cupcakes, but with a little twist: bacon! Bacon cupcakes are the trend now, but I made them years ago. I used Martha's Maple cupcakes as the base, then adjusted them for my purposes. These came out great!

First, I made candied bacon, which is just bacon, baked with brown sugar until caramelized and crispy. However, I used maple sugar, to intensify the maple flavor in the cupcakes. These smelled amazing! I did sample a bite or two, and they were sweet and salty and crunchy and yum! The important thing is to save some of the bacon fat to use in the cupcakes. 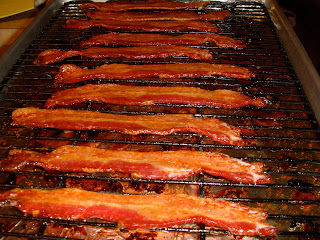 So, making the cupcakes, I added the bacon fat, and used half brown sugar and half maple syrup, instead of all maple syrup as the sweetener. Then I folded in the bacon crumbles, so each cupcake is filled with crunchy morsels. 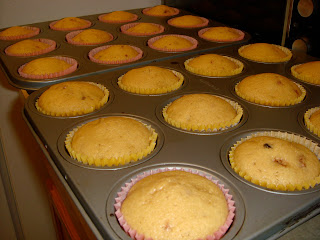 They baked up great, smelled amazing! Then I used a maple buttercream, which was a bit too thick, I should have thinned it a bit, but it was the perfect amount for 24 cupcakes. I topped each cupcake with a piece of candied bacon, for that added crunch, and to identify what's inside. 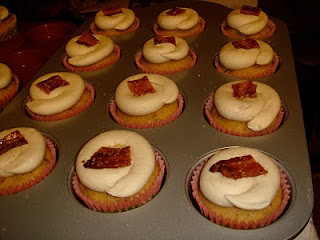 I get the craze with bacon, and paired with maple, it's really good, but I don't personally care for the combo. However, what the crowd demands, they get!
Posted by Tania at 9:42 AM 1 comment: